Let’s face it, getting and keeping the attention of kids is no easy task! Especially with terms like vinyasa and chaturanga, heck even when I first started yoga, these words made me giggle and raise an eyebrow.

“You want me to do what?!” Who am I kidding? I still laugh in class on occasion. Now imagine trying to get kids to take it seriously.

Regardless if you are at home trying to get your daily dose in or introducing the practice to a group or class, finding a way to interest children with a new and foreign activity like yoga can be a challenge.

Fortunately, it is easy to incorporate yoga into most everyday children’s games! Here are a few ideas to get you going:

After a leader is chosen, everyone lines up behind the leader. The leader will move around doing yoga poses and everyone has to mimic the poses.

Whoever is unable to follow the pose of the leader will have to sit out until the next round. The last person remaining then becomes the leader, and a new round begins.

A concept similar to hopscotch or a life-sized Candyland, create a colorful winding path through the room comprised of squares.

Each square with a picture of a yoga pose on it. Children take turns rolling a die and hop to a square based on the number they’ve rolled.

Then they do the pose they’ve landed on. It can either be a race to the finish line or to get each child to complete the path across the room.

Place pictures or names of yoga poses on each of the Jenga blocks. Every time someone pulls a block, they have to do the yoga pose before placing the block on top of the tower.

When the tower gets knocked down, everyone has to hold a challenging pose for as long as they can.

The person who is “it” chases everyone around trying to tag them. When they successfully tag a player that player must freeze in a yoga pose and remain frozen until another player, who has not been tagged, comes around and tags them to unfreeze them.

The game continues until all runners are frozen. Then, whoever was tagged last becomes “It.”

Make a DIY prize wheel either like a twister spinner or wheel of fortune. Label each little triangle with yoga poses. Each child takes a turn spinning and has to do the pose that is selected by the pointer.

A simple game includes rolling a regular dice, and whatever number is rolled is how long a chosen position must be held.

Another option is to make a giant die, but instead of putting numbers on each side, it’s yoga poses. Then, whatever position is dice selects is the position the player needs to do.

Just like an egg hunt, scatter and hide envelopes around the room or yard. You will find in each envelope a yoga card with pictures of different poses.

After collecting their envelopes, each child will open them up and do each pose collected. Or you can create a scavenger hunt list of clues that leads them to a location.

Each location they find has a different yoga pose that the group must perform.

Have all participants line up next to each other in a straight line in the downward-facing dog pose, creating a tunnel. Then a child from one end crawls through the tunnel to the other end and lines up in a downward dog next to the last person they crawl through.

Repeat until all children have had a chance to crawl through the “tunnel.” As an added option for continued learning about yoga, when someone comes out at the other end of the tunnel, he or she could practice his or her favorite posture while saying it out loud.

Doing so also signals the next person to crawl through the tunnel.

The first child should crouch down in child’s pose. The second player approaches placing their hands on their back and leaps over like a frog.

Be sure they are straddling their legs far apart to avoid crushing any hands. Upon landing, the child then assumes the child’s pose so that the third (and so on) can leap over.

Although not a game, it can be made fun for children. Especially with names like Lions Breath or Breath of Fire (which you could call Dragons Breath, sounds fun to me!).

Breathing techniques are a huge part of yoga and are useful tools in our daily lives. One of my best friends taught her boy’s yoga breaths as a way to calm down when they are frustrated or angry. She tells them to do their angry man breathing. They usually end up giggling from their exaggerated breathing.

Lion’s Breath is inhaling deeply through your nose. Then loudly exhaling while tilting your head back, opening your mouth widely, and sticking your tongue out.

Introduce Yoga In a Fun Way

If you are at home, playing yoga games is also a way to get some yoga in for you. Keep in mind, there is no perfect way to do yoga, and it’s called a practice for a reason.

Despite the modern stereotype, yoga isn’t a gorgeous blonde with a high ponytail, Lululemon leggings, and a fresh-pressed juice in hand. Make it light, make it fun, and flow with it! 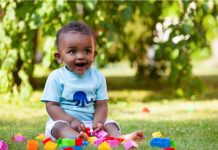 Outdoor Toys for One Year Olds: Types of Toys and Tips for Parents 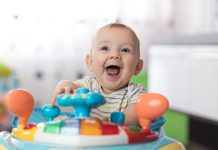 Are Exersaucers Bad for Babies? 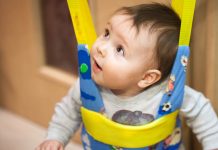 When Can I Put My Baby In a Jumper? 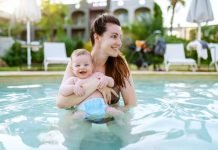 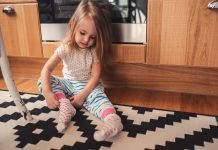 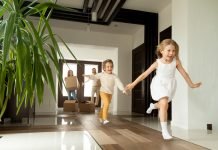