Maple syrup is a sweet and well-loved treat, but did you know that it has a surprising amount of health benefits?

For example, it’s a good source of vitamins such as zinc and manganese, calcium, and potassium (assuming that you’re eating real maple syrup and not the fake kind).

Kids love it because of its sweet taste; however, some moms are concerned about the amount of sugar in maple syrup, among other things.

So, is it safe for your baby to try? Here’s what the experts have to say on the matter.

In general, sugar can be hard for an infant’s digestive system to process. For this reason, experts recommend that parents save extra sweet treats like maple syrup until after your baby has reached 12 months of age.

After that, feel free to add a little syrup to your child’s french toast or porridge. It may be hard to resist your baby’s sweet face when they ask for a sugary snack, but keep their health in mind when you have to tell them ‘no.’

You may think that maple syrup is nothing more than a sugary treat, but in moderation, it can be pretty healthy! What are these benefits, you ask?

Here are some facts:

What is Considered Real Maple Syrup?

To be considered real maple syrup, the syrup must be made almost entirely out of sap from a maple tree.

The syrup is made after the tree’s starch eventually turns into sugar and rises in the tree sap. Once collected, this maple sap is heated and made into the syrup we all know and love.

If you’re buying maple syrup, take a close look at the package to see if you’re getting the real deal.

Are Different Grades of Maple Syrup Healthier Than Others?

Generally speaking, the darker the syrup, the better it is for you. Though all grades have similar sugar levels, darker syrups tend to have enough antioxidants to compare to vegetables!

For that reason, if you’re going for health benefits, it’s best to go for a darker grade. However, one drawback is that your child may not like the stronger flavor of the dark syrup.

Feel free to choose whatever works best for your family.

Can Maple Syrup Cause Botulism?

A common concern among parents is that maple syrup could cause a type of food poisoning called infant botulism.

This concern comes from parents being urged not to give honey to their babies due to a bacterium called clostridium botulinum that may be in it, and they’re concerned that maple syrup might have the same problem.

This bacterium is known to cause infant botulism, a rare but severe disease that can paralyze children.

However, since maple syrup comes directly out of the tree, it’s unlikely to be contaminated by the bacterium.

Even though it’s more than likely to be safe, you still shouldn’t feed maple syrup to babies under 12 months of age. If not for the risk of botulism, but to limit high sugar foods in the diet.

Maple Syrup Is Not Necessarily The Same As Pancake Syrup

It can be hard to tell maple syrup from the regular syrup that you put on your pancakes, especially since they taste similar.

So, what’s the difference? Well, pancake syrup is made from sugar syrup or corn syrup, rather than maple sap.

If you see the words high fructose corn syrup on the back of a syrup bottle, chances are you aren’t getting the real deal. Put it back!

What is High Fructose Corn Syrup? Is It Safe for Babies?

Those words may seem familiar to you – maybe you’ve seen them on the news or even on the back of a bottle of syrup.

High fructose corn syrup is a common replacement for sugar due to how cheap it is to make, but you won’t often find those words on the front of a package in bold letters.

This is because it’s developed a bad reputation among parents and health experts. Why? Let’s find out.

What experts have said:

So, what should you do?

How Can You Tell Real Maple Syrup From High Fructose Corn Syrup?

Read the ingredients! Though it’s good to look for things like high fructose corn syrup so you can avoid them, there are plenty of other things to look for. Here are a few tips for the next time you go shopping.

Try Using Real Maple Syrup As An Alternative To Other Sweeteners

While artificial sweeteners have no calories, they can cause all sorts of other problems such as weight gain (yes, even with no calories), memory loss, and fatigue.

Instead of opening a pack of Sweet ‘N Low, try drizzling a little maple syrup on your baby’s particular breakfast item – it will at least give them some nutritional benefits. Not only that, but it will also taste great!

Kids can be picky. For that reason, it can be difficult to introduce something new to your fussy little one.

If you’re thinking about adding a little maple syrup into your child’s diet, here are some things to try out:

It can be hard to introduce new things into your baby’s diet, but it’s worth a try to give them a well-balanced diet.

Though it’s still best to keep it in moderation, maple syrup is a decent addition to your child’s diet due to its nutritional benefits.

Just make sure you’re getting real maple syrup and not the cheaper kind to avoid any preservatives or artificial ingredients.

As always, feel free to talk to your pediatrician if you have any concerns about your baby’s diet. 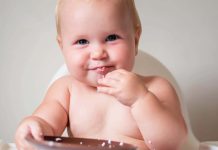 Can Babies Have Cottage Cheese? 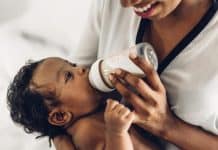 Can I Mix Breast Milk With Formula? 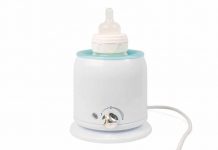 How To Use A Bottle Warmer 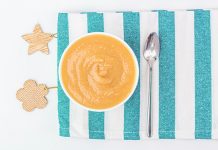 When Can Babies Have Applesauce? 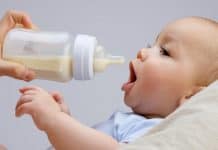 How Much Oatmeal Do You Put In A Baby Bottle? Busting the Wives Tale 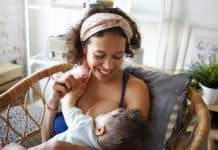 Why is My Baby Still Hungry After Breastfeeding?